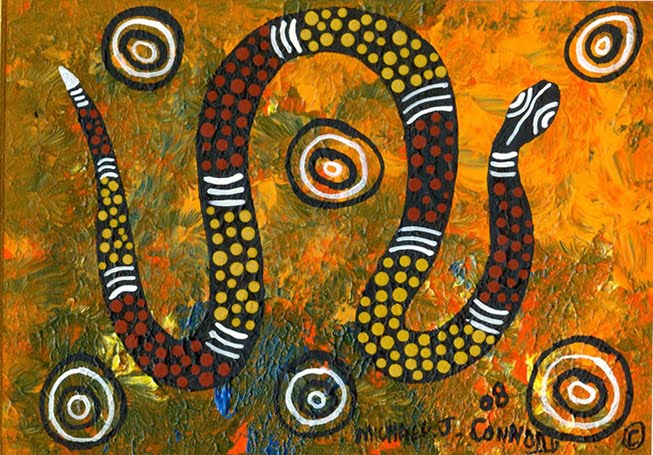 I encountered the painting of Rainbow Serpent firstly in listening part of the IELTS Examination Paper 8, and I reckoned it very interesting because this sort of art first appeared in Australian aboriginal rock art more than 6000 years ago, and perhaps as early as 8000 years before the present, as the seas rose after the last Ice Age as the paper mentioned. The Australian aboriginal rock art have recorded both real and symbolic images of their time on rock walls for many thousands of years. Throughout the long history of this tradition, aboriginal rock art has experienced three different artistic styles, that is the Dynamic, Yam and Modern style of painting.

These rock art paintings were given the name “Dynamic” due to the fact that the first human being images to dominate rock art paintings, over 8000 years ago, were full of movement showing people hunting and cooking food. Then the Yam style of painting got its name because it featured much curvier figures that actually resemble the vegetable called a yam, which is similar to sweet potatoes. However, they didn’t go as far as the Modern style, which is known as “X-Ray” because it actually makes a feature of the internal skeleton as well as the organs of animals and humans.

The Rainbow Snake is depicted as a long mythical creature made of the parts of different animals – kangaroo’s or flying fox’s head, crocodile’s tail – joined along the body of a huge python decorated with water lilies, yams and waving tendrils. This creature would have been unfamiliar to people living inland until the sea began rising after the last Ice Age and crept steadily inland, flooding familiar features and causing great disruption to climate, hunting and traditional patterns of life. Traditional food, plants and animals dwindled and war increased as groups of people from diverse language and cultural groups were forced to share the diminishing landscape. Because of this stress, the serpent became a symbol of unity and peaceful cooperation, as well as of creation and destruction.

Today the Rainbow Serpent is associated with ceremonies about fertility and abundance, as well as the organisation of the community and the keeping of peace. I googled the web for information about the Rainbow Serpent and, to my surprise, this ancient art has turned out to be an Australian indigenous festival held every year featuring dance, colour, expression and celebration and attended by as many as over 10,000 people around the globe. What an amusing thing!