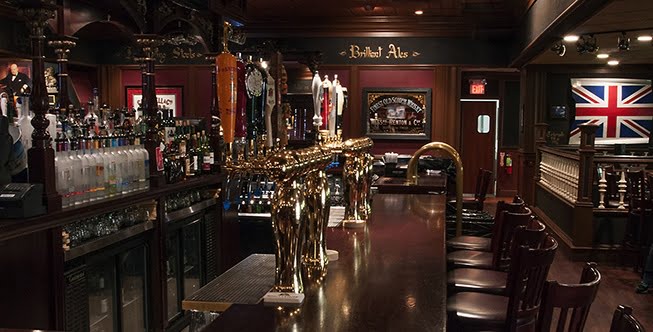 What is a pub?

The word pub is short for public house. There are over 60,000 pubs in the UK (53,000 in England and Wales, 5,200 in Scotland and 1,600 in Northern Ireland). One of the oldest pubs, Fighting Cocks in St. Albans, Herts, is located in a building that dates back to the eleventh century.

Pubs are an important part of British life. People talk, eat, drink, meet their friends and relax there.

Pubs often have two bars, one usually quieter than the other; many have a garden where people can sit in the summer. Children can go in pub gardens with their parents.

Groups of friends normally buy “rounds” of drinks, where the person will buy drinks for all the members of the group. It is sometimes difficult to get served when pubs are busy: people do not queue, but the bar staff will usually try and serve those who have been waiting the longest at the bar first. If you spill a stranger’s drink by accident, it is good manners (and prudent) to offer to buy another drink.

Most pubs belong to a brewery (a company which makes beer) but sell many different kinds of beer, some on tap (from a big container under the bar) and some in bottles. The most popular kind of British beer is bitter, which is dark and served at room temperature (not hot, not cold). British beer is brewed from malt and hops.

More popular today though is lager, which is lighter in colour and served cold. Guinness, a very dark, creamy kind of beer called a stout, is made in Ireland and is popular all over Britain.

In the West of England, cider made from apples, is very popular. Like wine, it is described as sweet or dry, but is drunk in beer glasses and can be stronger than beer.

Beers are served in “pints” for a large glass and “halves” for a smaller one.

Most pubs offer a complete range of beers, local and imported, with German, Belgian and French beers being in demand.

British people drink an average of 99.4 litres of beer every year. More than 80% of this beer is drunk in pubs and clubs.

British pubs are required to have a licence, which is difficult to obtain, and allows the pub to operate for up to 24 hours. Most pubs are open from 11 to 11.

Nearly all pubs sell pub lunches. One of these is the Ploughman’s Lunch which is a great wedge of Cheddar cheese, some bread, some pickle, and an onion. Other typical pub foods are scampi (kind of shellfish) and chips (fried potatoes), pie and chips, and chicken and chips.

Pubs have traditional names which date back over 600 years.

Some typical names are The Chequers, The White Swan, The Crown, The King’s Arms, The Red Lion and The White Horse. People often refer to the pub by its name when giving directions: Turn left at the Rose and Crown. There is usually a sign outside the pub showing the pub’s name with a picture.

Various games, especially darts, are common features of pubs; many of the old country pubs continue to promote traditional games, such as “Bat and Trap” (played in Kent) which have been played for hundreds of years.

The legal age to purchase alcohol is 18. People aged 16 and 17, with the licensee’s permission, may consume only 1 glass of wine, beer or cider with a table meal in specific areas of the premises, providing they’re with an adult and the adult orders it (England & Wales only, Scotland no adult required to be present).

It is illegal to sell alcohol to someone who already appears drunk. You may not buy alcohol for a drunk person on licensed premises. All off-sales are advised to ask for photographic ID if the person looks under 21. Purchasing alcohol on behalf of a minor will result in an £80 on-the-spot fine.

Fourteen-year-olds may enter a pub unaccompanied by an adult if they order a meal. Children may enter a pub with their parents until 9 p.m., which lets families enjoy reasonably priced pub meals together, and allows pubs to continue in their traditional roles as community centres.

The legal age for drinking in one’s home is 5 provided parental consent is given. Children under 5 must not be given alcohol unless under medical supervision in an emergency.

Customs in British pubs differ from those in American bars. In most pubs in Britain, you must go to the bar to order drinks and food and pay for your purchase immediately, there is no table service. Bartenders are called “barmen” and “barmaids” and they do not expect frequent tipping. To tip a barman or barmaid, it is customary to tell him to “would you like a drink yourself?”

Some pubs have a waiting service, where orders are taken by waiters at the tables and not paid for immediately. There is usually a sign in the pub which tells you that diners will be served at the table. It is customary to tip your waiter/waitress at the end of the meal (approx 10%). Sometimes this is included in the bill.