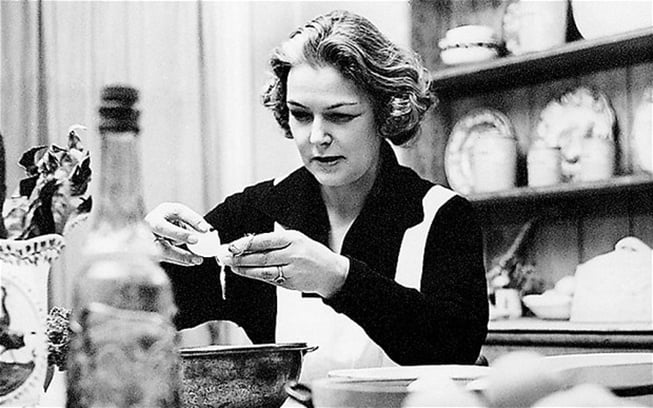 She was the doyenne of food writers, credited with bringing French and Italian cuisine into British dining rooms.

Elizabeth David was a British cookery writer who, in the mid-20th century, strongly influenced the revitalisation of the art of home cookery with articles and books about European cuisines and traditional British dishes.

It is said that she is the woman who introduced English to olive oil and garlic. Elizabeth was a woman of exceptional talent and a personality that defied conventions from a very young age. She belonged to a family of an influential politician and enjoyed the fruits of living in an upper-middle class society but as she grew up, she realized that the traditions of this society were irksome. She went on an expedition to Greece on a small sailing boat with her controversial lover. She lived in France, Italy, Greece and Egypt for considerable amount of her life and returned back to England. She found English food and culture utterly dismaying as compared to the richness of flavours and taste that she was now accustomed to. These flavours of food and life were missing from the grey and bland environment of England. This compelled her to write about Mediterranean food for ‘Harper’s Bazaar’ and from there on started to write her famous cookery books on food, flavour, herbs, kitchen utensils, places and culture of places like Italy, France, Turkey, Egypt, Greece, etc. She changed the face of British kitchens by introducing people to rich ingredients and alternative cooking techniques.

I found an audio tape from BBC introducing the great writer who transformed the British life.

The script is as follows:

Like most food writers I’ve loved Elizabeth David’s work. But most of the last generation of food lovers seems to regard her as a saint with an unquestioning, almost cult-like enthusiasm. As a result she’s a terrifically dominant presence in our food culture, probably the biggest single influence on the British food scene. But she was clearly a complicated personality and working in an entirely different era. British food and the people who make up our present diverse food scene would be all but unrecognisable to her. Unlike the last generation, my generation needs to question the exact nature of the legacy.

It’s Elizabeth David’s centenary this week, the woman who in the difficult days of rationing after World War II, started the cookbook boom and according to some, taught us all to cook, mostly food from sunnier lands than ours. I knew how to cook when I went to university. But when a friend made David’s oxtails with grapes, a perfect student-budget dish, it opened up a new world. I was late to that revelation because Elizabeth David’s books started creating a stir in 1950 when she published Mediterranean Food, swiftly followed by French Country Cooking, Italian Food, Summer Cooking and French Provincial Cooking, all in ten years. The Continent, as people used to say with a capital C, was no longer a mysterious land. Well, that’s how I see the story.