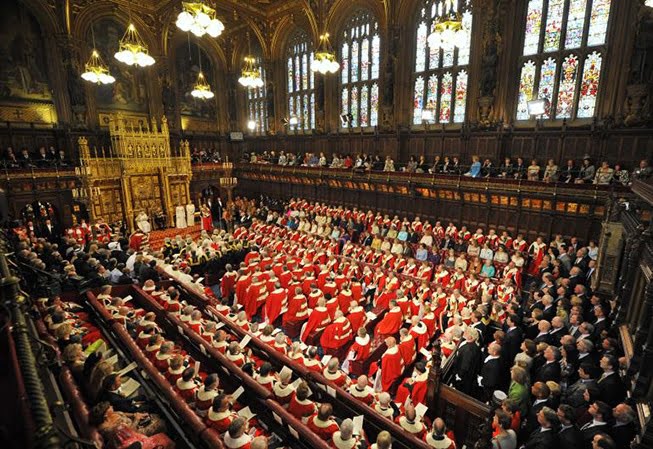 While I am out on my first vocation this year in Sanya, in the south of China, I still keep on updating my blog on British things after a nap, introducing the British government.

The two Houses of the Parliament of the United Kingdom (the House of Lords and the House of Commons) are based at The Palace of Westminster, also known as the Houses of Parliament, in London.

The palace lies on the north bank of the River Thames in the London borough of the City of Westminster, close to the government buildings of Whitehall.

Parliament decides the laws and makes decisions on running the UK. (Some issues in Scotland, Wales and Northern Ireland are now dealt with by their respective parliaments and assemblies.) There has been a parliament at Westminster since the 13th Century.

The UK government is normally formed by the leader of the party that wins the most seats in the general election. All actions by the government – and particularly its proposals to amend or create laws – are scrutinised within parliament.

Parliament represents the people. It is where we send our chosen representatives to represent our views in the House of Commons. Parliament is where politicians (MPs) meet to decide laws and make decisions for the United Kingdom. It is not the same as the Government (which runs the country). One of the jobs Parliament does is to check that the Government is running the country properly.

What is the job of Parliament?

The main functions of Parliament are:

Parliament is made up of three parts:

The Queen is the official Head of State. Britain has a constitutional monarchy where the Queen only rules symbolically; in reality, power belongs to Parliament. So, although the Queen “opens” Parliament each year and laws are passed in her name, the Queen herself plays no part in determining decisions made in Parliament.

The Queen has the final say on whether a bill becomes law.

The last Monarch to reject a law that was wanted by both Houses of Parliament was Queen Anne. She died in 1715.

The House of Lords

The House of Lords is made up of people who have inherited family titles and those who have been given titles because of their outstanding work in one field or another. There are 675 members of the Lords.

Who sits in the House of Lords?

A person who sits in the House of Lords is a peer.

What is the job of the peers in the House of Lords?

The main job of the House of Lords is to ‘double check’ new laws to make sure they are fair and will work.

Who sits in the House of Commons?

A person who sits in the House of Commons is called a Member of Parliament (MP).

The House of Commons has 650 members (MPs) who have been elected by local residents to represent an area of the country in Parliament.

Each MP represents one of 650 constituencies (areas) in the UK and is a member of a political party, such as New Labour or the Conservative party.

What happens in the House of Commons?

The Commons is the most important place for discussing policies and making laws.

What is the difference between Parliament and the Government?

The Government runs the country

Being a Member of Parliament (MP) is not the same as being in Government. The political party that has more seats than all the others runs the country.

For example after the 1992 general election the largest party, the conservatives, had 21 more seats than the all the others. This is called a majority. With such a majority they could out vote all the other parties, so they formed the Government. Their party Leader, John Major, became the Prime Minister.

After the 1997 general election the picture was rather different: the Labour Party had a majority of 179 and its leader, Tony Blair, became Prime Minister. All parties aim to win a majority of seats. When they do, they become the Government.

In the 2010 general election no single party won enough majority of seats to form the government alone. So in order to form a government two or more parties had to join together. David Cameron, the leader of the Conservative Party, formed a new government, in coalition with the Liberal Democrats.

A coalition is an alliance among individuals or groups, during which they cooperate in joint action, each in their own self-interest, joining forces together for a common cause.
David Camoron became Prime Minister and Nick Clegg, leader of the Liberal Democrats became his deputy.

The leader of the Government is the Prime Minister

The new Prime Minister chooses a team of people from Parliament who will run the country with him. Any MPs or Lords in the team he or she picks are now members of the UK Government.

There are normally about 100 people in a UK government.

The Government is different from Parliament.

The Government is also different from the the rest of the party who won the election.

England is the only country in the UK not to have its own separate parliament.

The Northern Ireland Assembly of 108 members was elected in June 1998. In May 1999 the Scottish Parliament in Edinburgh and a Welsh Assembly in Cardiff were established.

Despite Scotland, Wales and Northern Ireland having more control over their countries, the UK parliament in Westminster (London) retains responsibility for areas such as defence and foreign affairs. And they all have continued representation in the UK Parliament at Westminster in London.