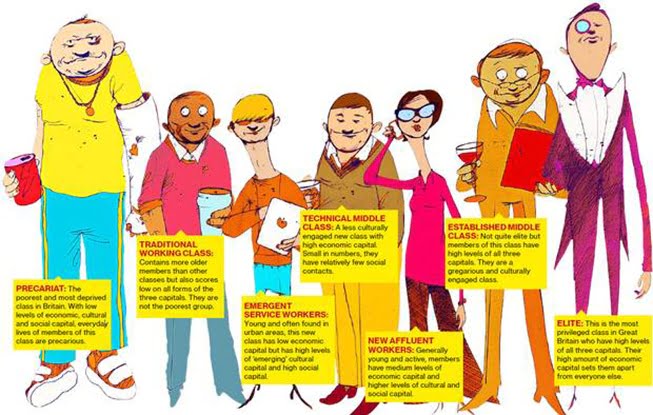 Britain was once a class-ridden society. Today, multiculturalism and a changing economy are gradually eroding the British class system, but some features of the system still remain.

Sociologists define social class as the grouping of people by occupations. Doctors and lawyers and university teachers are given more status than unskilled labourers. The different positions represent different levels of power, influence and money. In days gone by your class would affect your chances of getting an education, a job, etc. and it would also affect the people who you could socialise with and marry. Today this type of thing is all-but-gone with the high-profile exception of the Royal family.

The British society has often been considered to be divided into three main groups of classes:

Although some people in the UK still refer to themselves as “working-class”, “lower-middle” or “upper-middle” (and of course there are those who think of themselves as the “elite” class), to the majority of the British the meanings don’t seem to matter much these days.