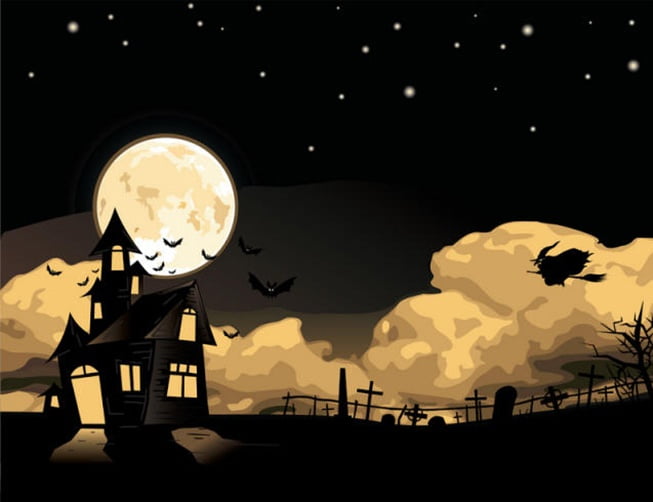 Superstitions can be defined as, “irrational beliefs, especially with regard to the unknown”(Collins English Dictionary).

Lucky to meet a black cat. Black Cats are featured on many good luck greetings cards and birthday cards in England.

Lucky to touch wood. We touch and knock on wood to make something come true.

Lucky to find a clover plant with four leaves.

Horseshoes are generally a sign of good luck and feature on many good luck cards.

Catch falling leaves in Autumn and you will have good luck. Every leaf means a lucky month next year.

Cut your hair when the moon is waxing and you will have good luck.

Unlucky to walk underneath a ladder.

Seven years bad luck to break a mirror. The superstition is supposed to have originated in ancient times, when mirrors were considered to be tools of the gods.

Unlucky to spill salt. If you do, you must throw it over your shoulder to counteract the bad luck.

Unlucky to open an umbrella in doors.

The number thirteen is unlucky. Friday the thirteenth is a very unlucky day. Friday is considered to be an unlucky day because Jesus was crucified on a Friday.

Unlucky to put new shoes on the table.

Unlucky to pass someone on the stairs.

When finished eating a boiled egg, push the spoon through the bottom of the empty shell to let the devil out.

In Yorkshire, housewives used to believe that bread would not rise if there was a corpse (dead body) in the vicinity, and to cut off both ends of the loaf would make the Devil fly over the house!
Table Superstitions

Crossed cutlery on your plate and expect a quarrel.

Leave a white tablecloth on a table overnight and expect a death.

One ancient British superstition holds that if a child rides on a bear’s back it will be protected from whooping-cough. (Bears used to roam Britain but now they are not seen on our shores)

In some parts of the UK meeting two or three Ravens together is considered really bad. One very English superstition concerns the tame Ravens at the Tower of London. It is believed if they leave then the crown of England will be lost.

It is said to be bad luck if you see bats flying and hear their cries. In the middle ages it was believed that witches were closely associated with bats.

If a Sparrow enters a house it is an omen of death to one of the people who live there. In some areas it is believed that to avoid bad luck, any Sparrow caught must be immediately killed otherwise the person who caught it will die.

In some areas black Rabbits are thought to host the souls of human beings. White Rabbits are said to be really witches and some believe that saying “White Rabbit” on the first day of each month brings luck. A common lucky charm is a Rabbit’s foot, but not for the Rabbit.

It is thought very unlucky to have the feathers of a Peacock within the home or handle anything made with them. This is possibly because of the eye shape present upon these feathers i.e. the Evil-Eye associated with wickedness.

Bride and groom must not meet on the day of the wedding except at the altar.

The bride should never wear her complete wedding clothes before the day.

The husband should carry his new wife over the threshold of their home.