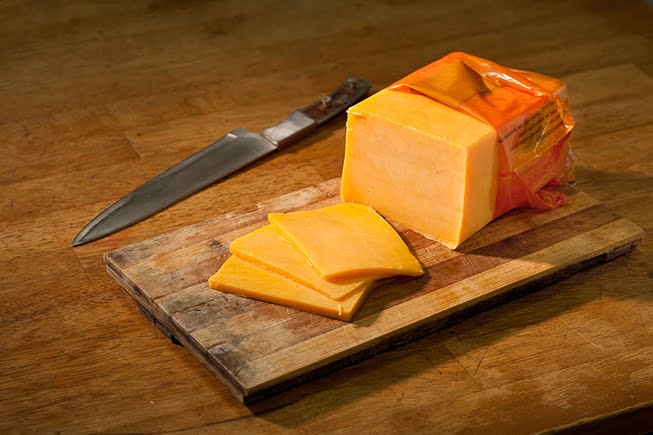 Today I continued introducing the special Cheddar cheese just because of its perfect taste. I have bought it several times though I am not totally keen on the Western food.

Probably the most consumed cheese in the world, Cheddar originated from Somerset around the late 12th Century and took its name from the Gorge or caves in the town of Cheddar that were used to store the cheese. The constant temperature and humidity of the caves provided a perfect environment for maturing the cheese. The town also gave its name to a unique part of the cheesemaking process – known as Cheddaring – which is the process of turning the slabs of curd and piling them on top of each other in a controlled way to help drain the whey.It also stretches the curd. The process helps to create a harder cheese with firm body and is unique to Cheddar making.

Cheddar making in Somerset goes back more than 800 years with records from the King of England’s accounts (the so called “Great Roll of the Pipe”) noting that in 1170 the King purchased 10,240 lbs (4.6 tonnes) of Cheddar cheese at a cost of a farthing a pound. The king at the time- Henry II – declared Cheddar cheese to be the best in Britain and his son Prince John (who reigned between 1199 and 1216) clearly thought the same as there are records of him continuing to buy the cheese for the great Royal banquets. In the reign of Charles 1 (1625 to 1649) parliamentary records show that the cheese made in Cheddar was sold before it was even made and indeed was only available at the court.

In 1724 Daniel Defoe devoted a chapter to Cheddar and its cheese in his book “A tour of the Islands of Great Britain”.

Today Cheddar cheese is still made in Somerset but also all over the world. It is made on farms in the West Country and 14 makers are licensed to use the EU Protected Designation of Origin “West Country Farmhouse Cheddar”. The cheese must be made on a farm in the four counties of Devon, Cornwall, Dorset and Somerset from locally produced milk and using traditional Cheddar making techniques – including hand Cheddaring. West Country Farmhouse Cheddar is matured in the region and sold at a minimum age of 9 months and is subject to regular grading throughout its life.

Cathedral CityLarger dairies throughout the UK also make Cheddar and this is sold at different ages. Mild Cheddar is typically sold at about 3 months of age; medium matured Cheddar at 5 to 6 months; mature Cheddar at around 9 months, Extra Mature at around 15 months and Vintage at 18 months or more.

As Cheddar matures so it’s taste develops from the young creamy taste of mild Cheddar to complex, lasting, slightly nutty flavours of mature Cheddar and beyond.

Major brands include Cathedral City, Pilgrims Choice, Colliers and Seriously Strong whilst many supermarkets will now include the creamery or the farm in which the cheese was made. For example, Davidstow, Taw Valley, Lake District, Caledonian Pembrokeshire, Lockerbie and Isle of Man in the case of major creameries and Alvis, Gould, Denhay, Parkham, Brue Farm, Quickes, Goodwood Estate or Keens, in the case of farm made cheeses. Cheddar is made in most areas of the country often as a balancing cheese when milk supply from a farm peaks.

Traditionally made Farmhouse varieties, which may be cloth bound, become significantly harder as they age; the texture becomes drier and the flavours generally more complex than their creamery counterparts. Some of the farm-made Cheddar uses unpasteurised (raw) milk which will tend to have rather more complex and stronger flavours, whilst others will use pasteurised milk. Cheese flavour will also vary depending on the time of year it was made and what the cows may have been eating at that time.

Creamery made Cheddar is increasingly being sold at a longer age in response to changing consumer tastes for tastier cheese. These more mature (extra mature or vintage) Cheddars often have a characteristic sweet, nutty flavour with a very long finish. Mild Cheddar remains popular as an every day cheese and is characterised by a gentle, creamy flavour and has the added advantage of slicing easily.

So whatever your preference there will be a Cheddar for you depending on its age, how it was made, where it was made and the time of year that it was made.

If you can, try before you buy because every Cheddar will be slightly different. Find the one that you like and try to remember its name and its age (as defined by mild, medium mature etc). For a difference try one of the smoked or smoke flavoured Cheddars which many cheese shops now offer or the blended Cheddars where ingredients such as herbs, spices, Marmite© or fruits may have been blended with the matured cheese to produce a whole range of different taste sensations.