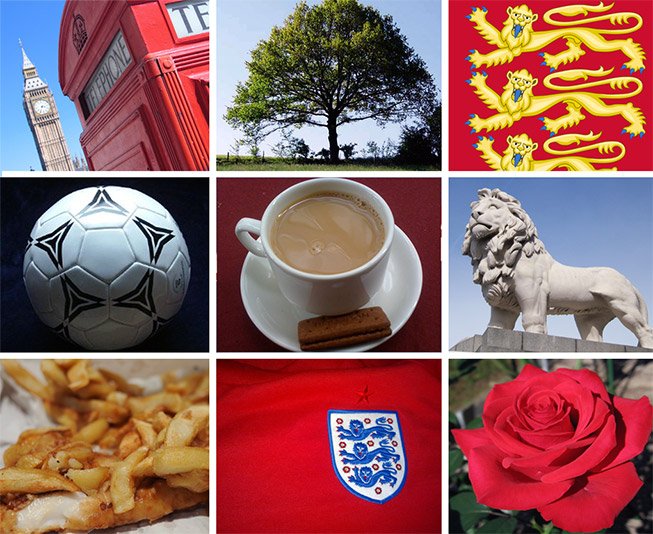 The symbols of England

Every country is represented by a symbol or symbols that give it its recognition that is unique from other countries. England, which is one of the countries that comprise Great Britain, has many familiar symbols which are automatically connected with it even without an accompanying explanation.  Most of them can be found printed on souvenir items often sold to tourists.

England has three national symbols comprised of the St. George’s Cross as seen on the flag, the Three Lion Emblem as seen on England’s Cricket Team Badge, and the Red Rose as seen on the English Rugby Union Team Badge.  These three symbols more or less represent England and its culture along with other familiar symbols such as St. Edward’s Crown, the Oak Tree, and tea.   Personalities that have been iconized and are often considered official English symbols as well include St. George who is the country’s patron saint, Alfred the Great who is recognized as the most dominant ruler of England, and Robin Hood who is the heroic outlaw perpetuated by English folklore.

In the present day England, many personalities and inanimate objects inevitably fall under the category of an English symbol by virtue of the recall factor.  Leading the list is of course the Royal Family which like it or not, will always represent England.  The people surrounding the Royal Family and their environs have also become symbolic of English culture including the Life Guard, the Foot Guard, and the Beefeaters.

Famous landmarks such as the Buckingham Palace, Big Ben, and the London Eye are all automatically associated with England.  Sports such as football and cricket are both English-made and so are fish and chips.  Familiar sites in England that have elevated themselves as distinctive components of the English culture include the Red Double Decker buses, the black taxi cabs, and the red pillar boxes and telephone booths.

« What is the best way to apologise in English? Take a trip to Pooh Country »