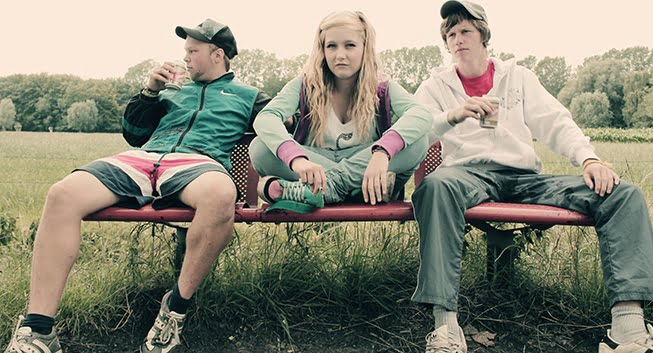 Over the past few years, there has been a new culture in England which is fast becoming a widespread epidemic. Everywhere you go in England you’ll see Chavs. They normally hang around their favourite “Maccy D” (MacDonalds) outlet, off licence waiting to nick free booze or just the streets where they try at every opportunity to vandalise property, drink cheap Stella, verbally abuse passers by and terrorise the elderly.

Chavs have a distinct dress code. Fake designer labels are a must. The male chav will normally wear a hooded top to conceal his panicky face, loose tracksuits, white trainers, and most importantly a Burberry baseball cap.

The female Chav or “Chavette” will scrape all her hair up into a tight ponytail on the back of her head, also known as ‘Croydon facelift’. She will tend to wear a dark blue trackie with white stripes, a big puffa jacket, a dozen hoop earrings, and also white trainers. Chavettes are not allowed to wear socks, and all Chavs are required to wear as much fake jewellery as they possibly can. Mobile phones are an extra status symbol, and when they are equipped, the Chav must shout into it in an extremely anti-social fashion.

Typically, Chavs speak a unique language which is virtually incomprehensible to non-Chavs. It’s thought to have its roots in English though most people are not quite certain. Chavs tend to use pitifully brief words, and their sentences are always punctuated with ‘innit’. Obviously, very few ordinary people will be able to understand the language, making a conversation with Chavs pointless.

Smoking is often seen as Chav’s favourite pastime which makes them spit and cough every 15 seconds. They love drinking alcohol, usually cheap lager or cider that’s been nicked from their local off licence. This gives them a wrong impression that they are tough and as such they will try to start a fight with anyone much smaller or weaker than them. However, any sort of retaliation by their victim often leads to them running away.

Much to the surprise of everyone, Chavs can be found in education too. Again, they tend to survive in packs and haven’t got much to offer but howl and bray in the classroom, so that other people will never be able to learn stuff. Fortunately enough for most people, however, Chavs tend to leave school before the age of sixteen whether voluntarily or not in order to pursue early parenthood or in many cases a life of crime.

It is no surprise that Chavs are responsible for the high growth rate in street crime that England has seen over the last few years. The country has been diagnosed with the ‘Chav’ cancer and as such many professionals have been working hard to find a cure. Unfortunately though, all present cures are still considered illegal in this free country.

If you happen see a young lad aged 12-30 dressed like an old woman’s shopping trolley, you are said to have witnessed a Chav. In this unpleasant situation, you are permitted by general consensus to find the nearest possible firearm and forcefully descend upon the said Chav without hesitation.

« Meet Dreadnoughtus, one of the most enormous animals ever Hop Hoodening – a very English tradition »