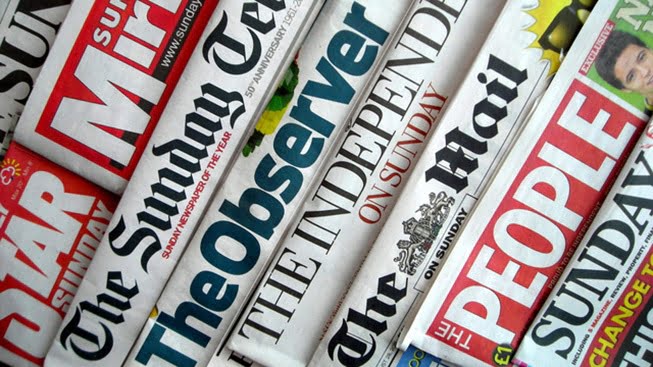 The media, or “Press”, in England is world famous for some good and some bad reasons.

The good reasons include that it’s not censored – anyone can write anything they like as long as it does not incite violence or hatred. This freedom of the press is an important English tradition, but it wasn’t always this way.

Nowadays, three entities control most of the television and radio media throughout the country:

The ITC. The Independent Television Commission is a body that regulates commercial television such as cable, sky (satellite) and televised text services (known often as “teletext”). It has now merged with the Radio Authority.
The BBC. The British Broadcasting Corporation is a world wide company that broadcasts radio and television. The Radio Authority, which licences commercial radio. It has now merged with the ITC.

According to a leading newspaper survey conducted in 2004, watching the television (or “Telly” as many English people call it) is England’s most popular pastime.

Televisions are so popular that 96% of people have one in their home. Apparently, the average English person watches more than 25 hours a week.

We have five big channels over here that are available to anyone with a T.V licence. BBC1 and BBC2 are non-commercial, as they do not run adverts. ITV1 and Channel 4, Channel 5 are commercial in that they get paid to display adverts for products between shows.

Most shows have an advert break every 20 or 30 minutes. On the BBC channels, there are thankfully none.

All channels have a wide variety of programmes. Entertainment, sport, films, drama, educational shows, news and children TV all fill the day and night. Documentaries are particularly popular at the moment.

The BBC has been broadcasting regularly since 1936! The main HQ of the BBC is in London at a place called “Television Centre”.

Nowadays there are many different BBC buildings for various departments such as film and news. There is Local BBC News in every area of the country, which links up with the main national news in the evenings. My father has worked for the BBC, so I have a special interest here.

What kind of shows do English people like to watch? English people enjoy many types of telly program, but we watch more of some than others. Here is a list of the most watched:D.I.Y. shows DIY stands for ‘Do It Yourself’ and refers to work around the home and garden such as redecorating and painting walls, or improving your garden. We say DIY instead of hiring a professional to do the job, as it can be rewarding and fun to do it yourself. These shows give you tips on DIY, and sometimes show other people getting it very wrong!Soap Operas are a television series that often run every day or regularly every week. They show the every day lives of people in often normal situations. The stories never end, just like real life. The most popular show is “Eastenders”, a soap about life in East London.

Reality TV These shows are about “ordinary” people doing things on TV, often live. One example is “Big Brother” where contestants live in a house for several months and are filmed 24 hours a day by secret cameras. The audience gets to vote who wins the show, normally based on nothing more than popularity.

The San Francisco cable cars
The California highway patrol
Passover, a Jewish holiday of remembering
Are you having a laugh?
Rosa Parks and the Civil Rights Movement
Queen's role