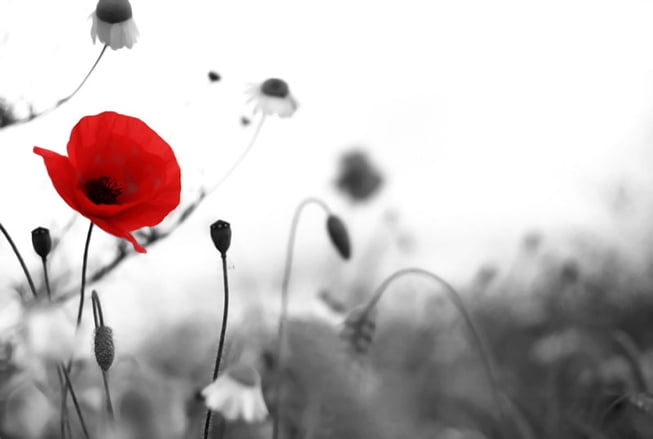 All about the red poppy

The red poppy was first used as a symbol to remember those who have died in war. Its use is attributed to Moina Bell Michael, an American teacher who raised funds for those who used to be in the military by selling silk poppies. The United States officially dubbed the silk poppy as the emblem for remembrance in 1920, and the UK followed suit a year after.

In about a week’s time, the nation will be celebrating Remembrance Day, and poppies will be all over the place yet again. Did you know that while red is the predominant colour that is used, poppies can also be worn in white and purple? White poppies trace their roots to 1933, thanks to the Women’s Cooperative Guild. The colour white stands for an end to all wars – peace. Purple poppies on the other hand are worn to commemorate animals which have fallen victim to wars.

Whichever colour of poppy you choose to wear, you should know that there is a time to wear the emblem. The norm is to wear poppies from 1 November until 11 November, which is Armistice Day. However, there are those who believe that poppies should only be worn until Remembrance Sunday.

Another thing you ought to take into consideration is where to wear your poppy – left or right? You will hear differing opinions, but the Royal British Legion maintains the stand that no place is right or wrong. What matters is that you wear that poppy with pride.

So, go ahead and get yourself a poppy and remind yourself – and everyone around you – what others have gone through and what you have to be thankful for.

Popular names in England
Australian jazz music
A bridal shower
New Year's Day, a holiday of new beginnings
What would you eat for a typical English breakfast?
The British throne

« IELTS Speaking topic: A beautiful or handsome person Words in the news: in a row »