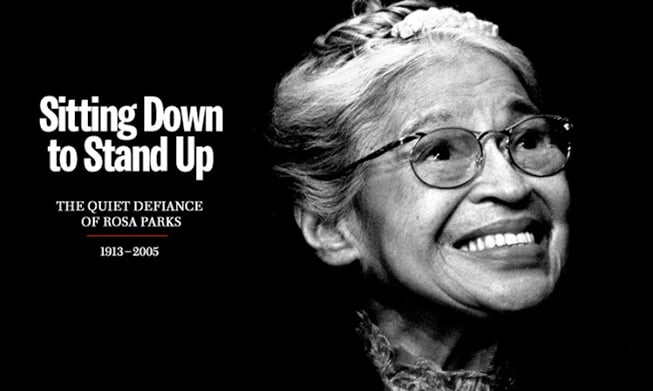 Rosa Parks is a prime example of how an ordinary American can change the world around her. She was born in 1913, in the southern state of Alabama. Parks became famous for challenging a discriminatory policy in the city of Montgomery, Alabama. During the 1950s, Black Americans in the south were not allowed to ride in the front seats of public buses if a white person needed that seat. Blacks were expected to get out of their seats, and go to the back of the bus, which was designated as “Colored Only.”

On December 1, 1955, Parks refused to obey the bus drivers order to surrender her seat to a white passenger who had boarded the bus. Even though Parks was seated in the Colored Only section, the bus was filled, and she was required by law to give her seat to the white rider. Parks was arrested, and charged with civil disobedience. She later said she had grown “tired of giving in.”

Her arrest and subsequent trial made Parks a national symbol for the Civil Rights Movement. Her arrest also lead to the Montgomery Bus Boycott that was a political and social protest campaign against racial segregation. Although the boycott only lasted 21 days, it was instrumental in the Supreme Court decision to declare Alabama’s practice of segregation unconstitutional.

Parks has remained a symbol for the Civil Rights Movement even after her death in 2005 at the age of 92. She has been called the “First Lady of Civil Rights,” by the United States Congress, and “The Mother of the Freedom Movement.” She has been honoured by the U.S. Government with prestigious awards such as the Presidential Medal of Freedom, and Congressional Gold Medal. She has been honoured with her own museum in Michigan, and has received several other civil rights awards both before and after her death.

« IELTS Speaking topic: A time you were friendly to someone you didn’t like Box Office Top 3: What could unseat ‘Furious 7’ at No. 1? »