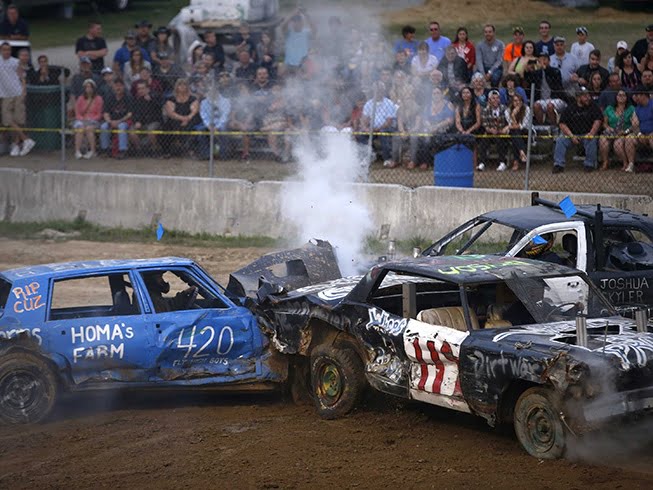 Many Americans grew up watching Demolition Derby events. The derby is a show in which drivers ram their vehicles into one another for demolition dominance. The object of the contest is to disable your competitor’s vehicle before it stops yours. It is an exciting attraction that appeals to Americans of all ages.

When Mark attended his first derby as a young boy, he was mesmerized by the action on the track. Demolition derbies are usually held in outlying areas where there is plenty of room to compete. Most derbies are in an arena, but one of the attractions of the sport is that derbies can be held just about anywhere. After watching his first match, Mark told his dad, “I’m going to be a derby driver one day, dad.” His father just chuckled, but encouraged his son.

Mark got his chance last year when he drove his orange, 1978 Mustang in the Riverside County Fair’s derby for the first time. The competition he entered featured 10 cars, and was as exciting as he thought it would be. He didn’t win his first competition, but he got valuable experience, and is looking forward to next year’s event. “I don’t give up easily,” Mark told his dad.

Demolition derbies got their start in New York in 1947 when former stock car racer Larry Mendelsohn realized that many people liked watching crashes more than racing. He began staging his derbies and they soon became popular at fairs and festivals. There are few rules involved with driving in a derby. Drivers can use any part of their cars to ram into other vehicles to disable them. The only rule is drivers cannot hit the driver side door where the driver sits. Most competitors use the rear portion of their vehicles to ram others, so as not to disable their own motors. Demolition derbies are a true American creation.