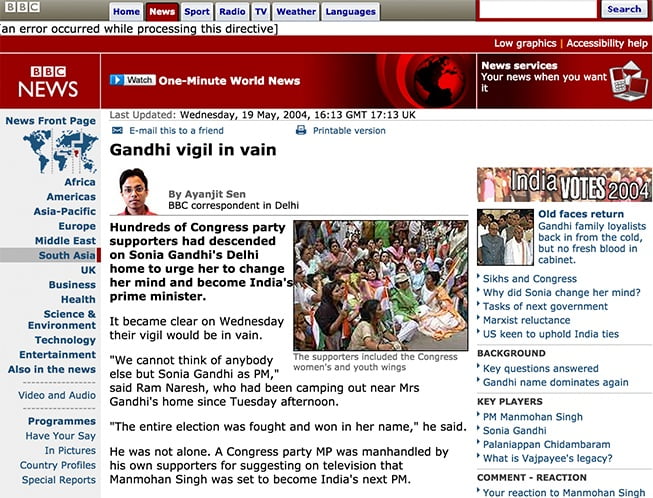 Words in the news: Vain

It became clear on Wednesday their vigil would be in vain.

“We cannot think of anybody else but Sonia Gandhi as PM,” said Ram Naresh, who had been camping out near Mrs Gandhi’s home since Tuesday afternoon.

“The entire election was fought and won in her name,” he said.

He was not alone. A Congress party MP was manhandled by his own supporters for suggesting on television that Manmohan Singh was set to become India’s next PM.

Alongside Mr Naresh – who is from Amethi, where Mrs Gandhi’s son, Rahul, was elected – was a spread of Congress supporters, including members of its women’s and youth wings.

They were shouting the slogans, “Our prime minister should be Sonia Gandhi” and “Sonia Gandhi come back”.

There were also some tourists, taking in the drama of Indian democracy.

Vain means that something does not produce the result you want.

1. She closed her eyes tightly in a vain attempt to hold back the tears.

2. I knocked loudly in the vain hope that someone might answer.

3. All his father’s exhortations were in vain.