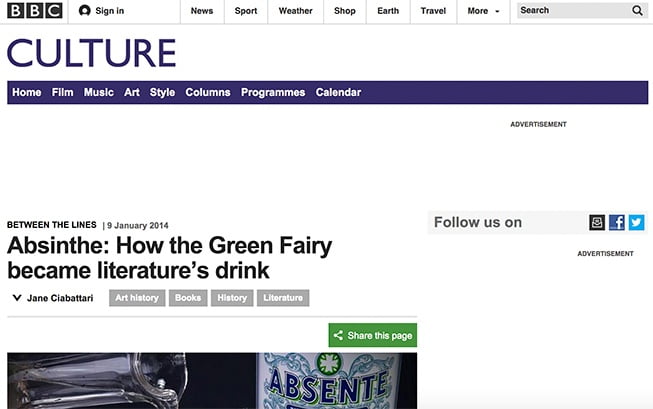 Words in the news: Decadence

Absinthe has inspired many great authors of the last 150 years – and may have ruined some as well. Jane Ciabattari investigates the green spirit’s peculiar power.

Arthur Rimbaud called absinthe the “sagebrush of the glaciers” because a key ingredient, the bitter-tasting herb Artemisia absinthium or wormwood, is plentiful in the icy Val-de-Travers region of Switzerland. That is where the legendary aromatic drink that came to symbolise decadence was invented in the late 18th Century. It’s hard to overstate absinthe’s cultural impact – or imagine a contemporary equivalent.

The spirit was a muse extraordinaire from 1859, when Édouard Manet’s The Absinthe Drinker shocked the annual Salon de Paris, to 1914, when Pablo Picasso created his painted bronze sculpture, The Glass of Absinthe. During the Belle Époque, the Green Fairy – nicknamed after its distinctive colour – was the drink of choice for so many writers and artists in Paris that five o’clock was known as the Green Hour, a happy hour when cafes filled with drinkers sitting with glasses of the verdant liquor.

Decadence is behaviour, attitudes, etc. which show a fall in standards, especially moral ones, and an interest in pleasure and enjoyment rather than more serious things.

1. But even your dreams will be but a pale shadow of my true decadence.

2. In time, the foul odor of Roman decadence would grow harder to disguise.