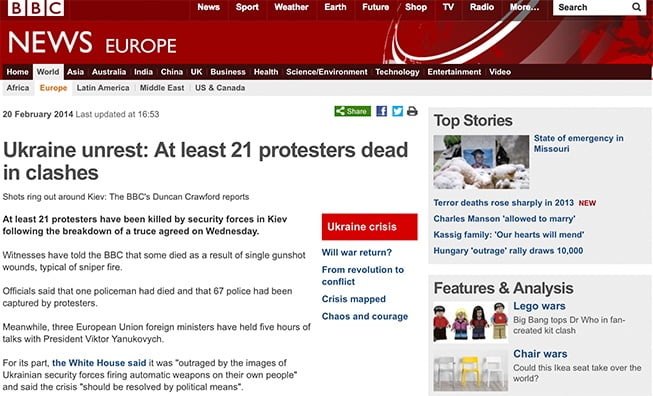 Words in the news: Truce

Origin:
At least 22 people have died in renewed clashes between protesters and police in central Kiev after a truce agreed on Wednesday broke down, eyewitnesses say.

A meeting between EU foreign ministers and President Viktor Yanukovych is now under way, officials say, contradicting earlier reports that the ministers had flown out without seeing him.

The EU will discuss sanctions later.

Eyewitnesses have told international news agencies that they have counted between 21 and 27 protesters’ bodies.

There are 12 bodies in a makeshift mortuary in the lobby of the Hotel Ukraine, a medical worker there has told the BBC.

Truce is an agreement between enemies or opponents to stop fighting for an agreed period of time.

1. This truce lasts for several days, depending on the location.

2. The end of the truce was marked by a bomb blast, killing at least 24 people.

3. In her first speech as prime minister, Ms. Gillard called for a truce.