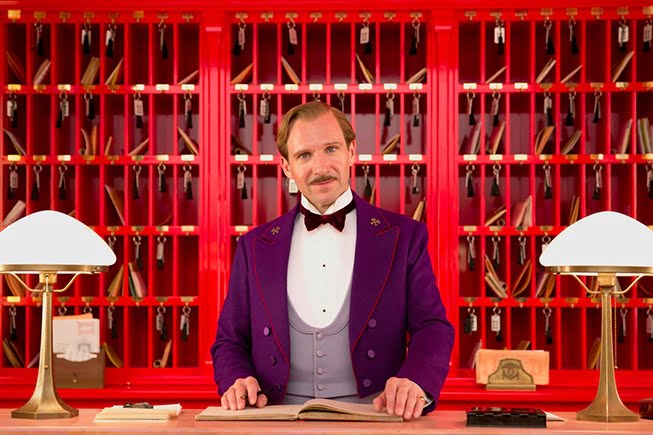 Reviews on The Grand Budapest Hotel from BBC

I quoted this short reviews particularly just because the words in this script are quite complex and less common. Every time I listen to the news reports on movies, I would definitely be struggling with these unfamiliar words. Therefore I think I should have to put them altogether to overcome at one time.

This movie, The Grand Budapest Hotel, is a 2014 English-language comedy-drama film written and directed by Wes Anderson and inspired by the writings of Stefan Zweig.

And the script is as follows:

First though, a film that rattles along in a fictional middle-European country in the years between the First and Second World Wars. Its central location is a hotel, not just any hotel, but the wedding-cake with a mountainous backdrop. That is “The Grand Budapest Hotel”, the latest dramatic microcosm from Wes Anderson, the director who brought us “Moonrise Kingdom” on an island, “The Life Aquatic” on a boat, “The Darjeeling Express” a train, and the subterranean lair of “Fantastic Mr. Fox”. The splendid Grand Budapest is presided over by a prince of concierges – the dapper Monsieur Gustave, Ralph Fiennes, who rules his staff and charms his guests, especially elderly rich ladies with a genuine passion. Amidst a sparkling cast of Wes Anderson regulars like Willem Dafoe, Bill Murray and Adrien Brody. Tilda Swinton plays a favoured superannuated heiress Madame D. This makes the second unconventional relationship on screen recently. Tilda can still be seen in Jim Jarmusch’s hipster vampire romance “Only Lovers Left Alive”. But compared with these old souls, the nonagenarian in Grand Budapest Hotel is quite frisky, enjoying mutual adoration with Monsieur Gustave.

It’s quite adolescent. You know, it has this breathless feeling to it, and reckless. This is feeling of, you know, the very fact not to give too much away, but I think everybody knows already that she leaves him, the great treasure of her family to the consternation of her terrible children. There’s something reckless and love-bound about that. And that’s the kind of a gesture that only somebody near middle 90s really has all source of 16, is really able to make, I think.

I have made the less common lexical vocabulary bold so that you can easily find them.