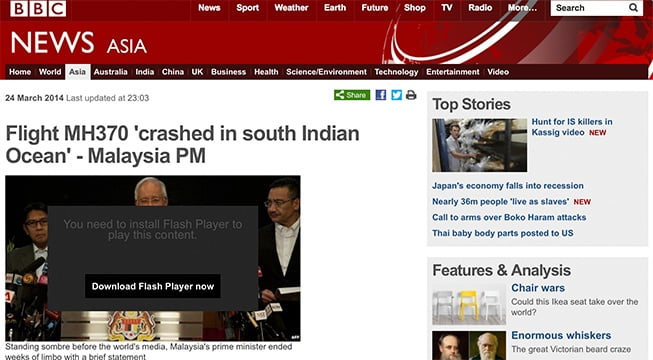 Words in the news: Debris

Najib Razak said this was the conclusion of fresh analysis of satellite data tracking the flight.

Malaysia Airlines had told the families of the 239 people on board, he said.

The BBC has seen a text message sent to families by the airline saying it had to be assumed “beyond reasonable doubt” that the plane was lost and there were no survivors.

There were 227 passengers on flight MH370, many of them Chinese.

Relatives of those on board who watched the announcement at a Beijing hotel wept with grief, and some were taken away on stretchers by medical teams.

China has demanded that the Malaysian authorities make available the evidence on which they based their announcement about the jet’s fate.

And some relatives of Chinese passengers expressed scepticism about their conclusion, as the plane has not been found yet.

Flight MH370 disappeared after taking off on 8 March from Kuala Lumpur.

A big international search operation has been taking place in the southern Indian Ocean, along the southern arc or corridor of the plane’s possible route, more than 1,500 miles (2,500km) off the south-west coast of Australia.

However, the search had to be suspended on Tuesday due to bad weather, the Australian Maritime Safety Authority (Amsa) said.

In the past day, both Australian and Chinese air force crews have reported spotting debris.

Debris are pieces of wood, metal, brick, etc. that are left after something has been destroyed.

1. Emergency teams are still clearing the debris from the plane crash.

2. They hunted through the debris on the floor to find the ring.