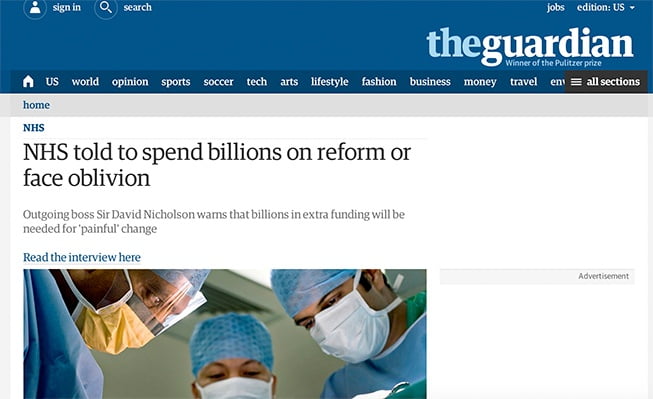 Words in the news: Oblivion

Billions of extra funding will be needed for the NHS to help push through “painful and unprecedented” changes during the next parliament, the outgoing boss of the health service warns.

In a frank interview with the Guardian, Sir David Nicholson said that whoever formed the next government would need to give the NHS extra cash because it could not survive if it had to remain in the straitjacket of austerity-era flat budgets after 2015.

The money would be needed so the NHS can dramatically rationalise hospital services, and concentrate its specialist and GP services – allowing an NHS Nicholson calls “unsustainable” to ditch its outmoded reliance on hospital-based treatment and switch to a new model of community-based care.

Nicholson declined to say how much more cash he believed would be required, but another senior NHS leader privately suggested it could be up to £5bn extra a year for several years.

Oblivion is the state in which somebody/something has been forgotten and is no longer famous or important.

1. Many ancient cities are buried in oblivion.

2. Only his unexpected resignation had saved him from oblivion.

« Elizabeth David What is BAFTA? »