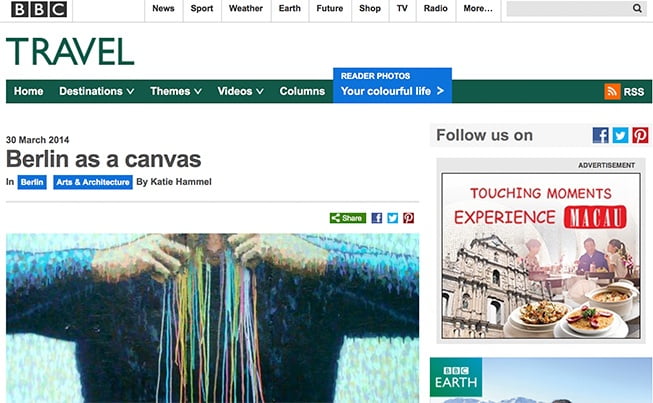 Words in the news: Prolific

The streets of Berlin – and the art that adorns them – have long had a story to tell. From murals that depict the trials of German reunification to paste-ups that comment on current events, the city’s graffiti is a record of its history and its people. And many of Berlin’s finest international artists use streets, buildings and public spaces – not canvases – to host their masterpieces. But if you don’t know where to look – or don’t know what it is you’re looking at – it’s easy to miss the narratives being told.

When the city was divided between East and West Germany, early street artists like French artist Thierry Noir used the western side of the wall as a place to share political messages and commentary on Berlin and the world at large. Noir is known as one of the first and most prolific of the wall’s artists; he began painting graffiti on the wall in 1984 and now his work is now featured prominently in the East Side Gallery, a 1.3 km section of the wall that displays more than 100 murals by artists from 21 countries. The paintings were done in 1990, a year after the city was reunited.

Today, however, the gallery is under threat of demolition to make way for luxury housing and a 14-storey hotel. A 6m stretch was temporarily removed during construction, and the hotel’s developer has asked for 20m of the wall to be removed permanently to accommodate a driveway. For now, however, the wall remains one of Berlin’s most evocative examples of artistic expression.

After the fall of the wall, artists from West Germany moved to neighbourhoods like Friedrichshain and Kreuzberg in the former East Berlin, lured by cheaper rents and an abundance of untouched canvases. They covered buildings in political statements and popularised tagging – the art of signing one’s name and expressing one’s identity – after years of being forced to blend in as part of the Communist machine.

Prolific is an adjective, indicating (of an artist, a writer, etc.) producing many works, etc; or able to produce enough food, etc. to keep many animals and plants alive.

1. Shakespeare was a prolific writer.

2. The Nile is a prolific river.