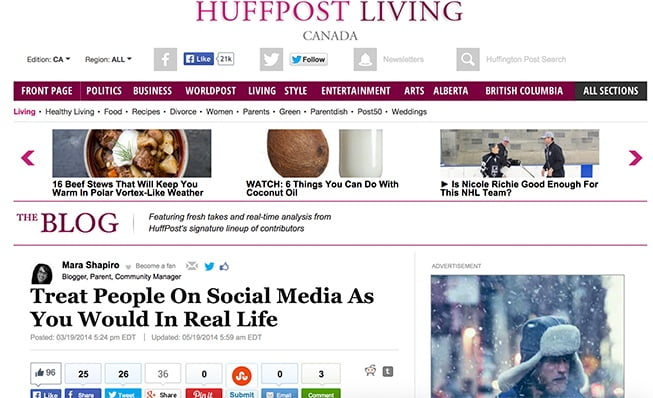 Words in the news: Semblance

Last week I wrote a post about mom bashing, and how women judge and gang up on each other. But I think that what I was trying to communicate –how we use social media to treat each other badly — got diluted because I used such a controversial example (Maria Kang) .

After much reflection and a most excellent discussion with a smart friend, I have refined and extended my message beyond Moms to..well..everyone. And it is this: Do unto others on social media as you would do unto them in real life.

Have you noticed that once someone is behind a screen it’s like all semblance of courtesy no longer applies? Just hang out on Twitter, Facebook, or anywhere commenting is enabled and you’ll see what I mean.

Call me June Cleaver, but I truly believe that social media has killed our concept of manners. Just like ironically, open access to information has actually made us even more small-minded.

It’s really not that hard to take a beat and consider the impact of your words or actions. Are they mean-spirited or just outspoken? Unkind or honest? Rude or activist?

As far as I’m concerned, there are seven social media fails that I see on a daily basis.

Semblance is a situation in which something seems to exist although this may not, in fact, be the case.

1. By now any semblance of normality had disappeared.

2. He was sad, but his face had the semblance of a smile.

3. The ceasefire brought about a semblance of peace.