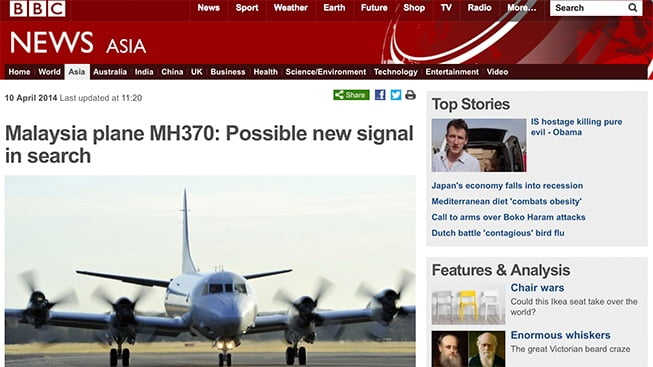 Words in the news: Buoy

An Australian P-3 Orion aircraft picked up the signal in the same area where an Australian vessel detected audio pings earlier this week, officials said.

The signal would require further analysis, but could have been from a “man-made source”, officials said.

The search zone was tightened on Thursday after a US navy “towed pinger locator” picked up audio signals in the area, sparking hopes that the plane’s black box was in the area.

Australian vessel Ocean Shield picked up four acoustic signals in the area, twice over the weekend and twice on Tuesday.

Speaking after the latest possible signal was detected, retired Air Chief Marshal Angus Houston, who is leading search efforts, said: “The acoustic data will require further analysis overnight but shows potential of being from a man-made source.”

Planes have dropped buoys equipped with hydrophone listening devices into the water to help pick up signals.

The batteries on the black box only last about a month, so teams need to work quickly to track the audio signals before they stop broadcasting.

Buoy is an object which floats on the sea or a river to mark the places where it is dangerous and where it is safe for boats to go.

1. The can buoy was submerged underwater.

2. At turns, everybody bunches up as close to the buoy as they can.

3. A tail buoy is connected to the far end of the cable.

« The must-have traits of handsome man Superstitions in Britain »