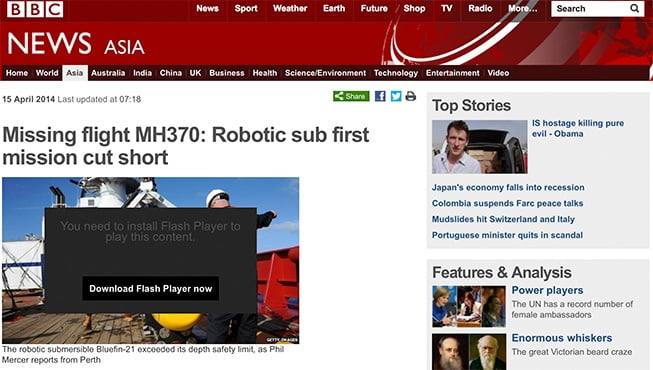 Words in the news: Drone

A robotic submarine deployed to search for the missing Malaysia Airlines plane in the southern Indian Ocean has had its first mission cut short.

The Bluefin-21 was sent to search the sea floor for wreckage after signals believed to be consistent with “black box” flight recorders were detected.

But the drone exceeded its operating limit of 4,500m (15,000ft) and was brought back to the surface.

It was due to return later on Tuesday if weather conditions permitted.

“To account for inconsistencies with the sea floor, the search profile is being adjusted to extend the sonar search for as long as possible,” an update from the US Navy – which operates the Bluefin-21 – said.

Flight MH370 went missing on 8 March with 239 people on board. It was flying from Kuala Lumpur to Beijing when it lost contact with air traffic controllers over the South China Sea.

Malaysian officials believe, based on satellite data, that it ended its flight thousands of kilometres off course, in seas west of the Australian city of Perth.

Drone is an aircraft without a pilot, controlled from the ground.

1. Unmanned aerial vehicles (UAVS), also known as drones, are aircraft either controlled by “pilots” from the ground or increasingly, autonomously following a pre-programmed mission.

2. The use of drones has grown quickly in recent years because unlike manned aircraft they can stay aloft for many hours.

« What are British social customs? IELTS Writing: Working at home »