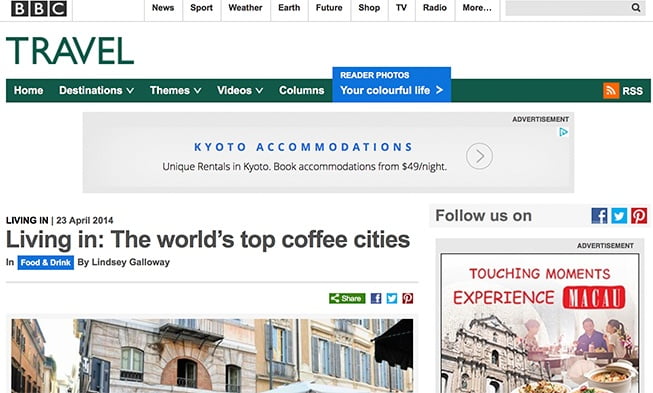 Words in the news: Offbeat

In many of the world’s top coffee cities, the cafe is more than just a place to get a warm drink – it is also a hub of culture and conversation for locals and visitors alike. And while each city defines its coffee culture in a different way – whether it be by their classic drink style or by the sheer concentration of independently owned coffee houses – these six cities, taken from “best of” lists in publications including Travel and Leisure and the USA Today, have one thing in common: the cities are filled with people who live for the craft of coffee.

Taipei, Taiwan
Taipei residents are known for being extraordinarily friendly and extremely polite. Since the island was once a Japanese colony, it is not uncommon for shop employees to smile and bow in unison when someone walks through the doors. And nowhere is this friendliness more apparent than in the city’s surprisingly unique cafes. Topo Cafe, in northern Taipei’s Western-style Tianmu neighbourhood, is so offbeat it has a miniature, gold-fish filled river running through the middle of it.

Alistair Chang, an American from the Washington DC area, lived in Taipei for a year, documenting his favourite coffee spots on his blog, Taipei Cafes. He said he especially loves the establishments near the Zhongxiao Dunhua transit station in southern Taipei’s Da’an district. “These cafes are a little bolder,” he explained in an e-mail. “Homey’s Cafe, for example, requires you to walk up two unmarked, sketchy cement stairs to find, while the Barbie Cafe is exactly what the title suggests: completely pink.”

Apartments near the station range from studios to three-bedrooms, and are modern with no extra frills, though they can still be on the expensive side. With no shortage of entertainment options, the Da’an district has lots of shopping, restaurants and is famous for the Tonghua and Shida night markets, where street vendors serve up budget-friendly snacks and gadgets.

Offbeat is an adjective describing different from what most people expect.

1. His style is offbeat but highly creative.

3. It encouraged experimenters to propose offbeat or novel approaches to problems.