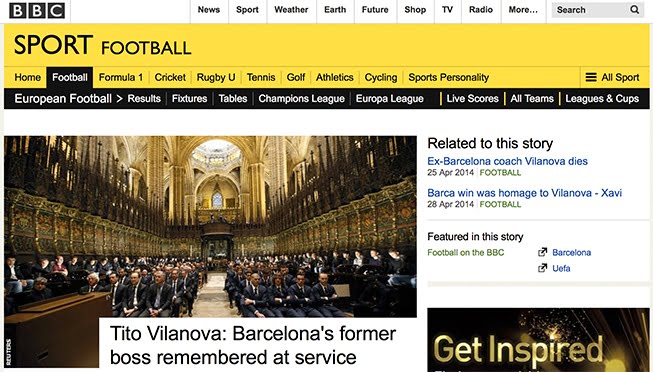 Words in the news: Relapse

Former Barcelona manager Tito Vilanova has been remembered at a ceremony following his death at the age of 45, with the club’s players in attendance.

The entire first-team squad, along with Vilanova’s family and figures from the world of football, attended the ceremony at Barcelona Cathedral.

Vilanova, who guided the Catalan club to the Spanish title in 2013, died on Friday after a battle with cancer.

A host of former club presidents, including Joan Laporta and Sandro Rosell were at the cathedral, with other clubs from La Liga sending delegations to pay their respects.

Over 50,000 people have attended a remembrance space that Barcelona have created at the Nou Camp.

The former Barca youth-team player was Pep Guardiola’s assistant manager for four successful years, before succeeding him in 2012.

Vilanova, who had a tumour removed from his throat in November 2011, suffered a relapse in December 2012. He returned to his job in March 2013 in time to see them win the title, but resigned that July to continue his treatment.

Relapse is a  the fact of becoming ill/sick again after making an improvement.

1. He can’t return to work because he’s had a relapse.

2. Everyone thought she was well until a sudden relapse sent her back to the hospital.