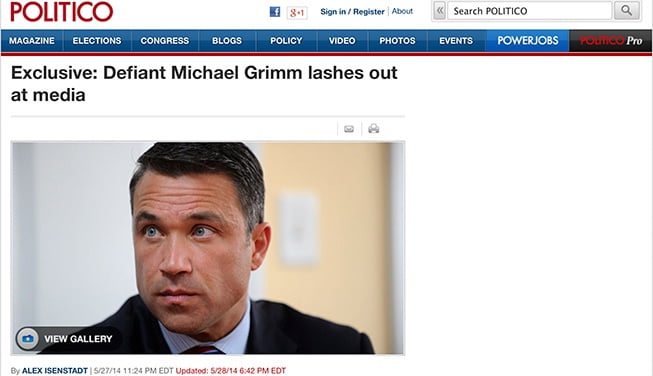 Words in the news: Defiant

Origin:
NEW YORK — A defiant Rep. Michael Grimm, in his most extensive interview since federal prosecutors accused him of rampant fraud, accused the media on Tuesday of trying to destroy him and vowed to campaign hard for reelection — even as the New York Republican acknowledged his fundraising has dried up to the point he can’t air TV ads.

Insisting he’s not the “bad boy” of Congress, the former Marine and FBI agent suggested that GOP leaders including Speaker John Boehner were acting “politically” by refusing to back his reelection to a competitive Staten Island congressional district. Grimm, now literally running his own campaign after his lone full-time political aide departed last week, promised to prove his skeptics wrong.

“There’s no question: I’ve been vilified by the press since the day I got here,” Grimm said in a tense 22-minute interview at Hinsch’s Diner in Brooklyn. “From the very beginning they had to figure out how to get rid of this guy.”

Defiant means someone is openly refusing to obey somebody/something, sometimes in an aggressive way.

1. The terrorists sent a defiant message to the government.

2. He put his paw on the prize and glared across the water with a defiant growl.

3. What he said showed he was really defiant.