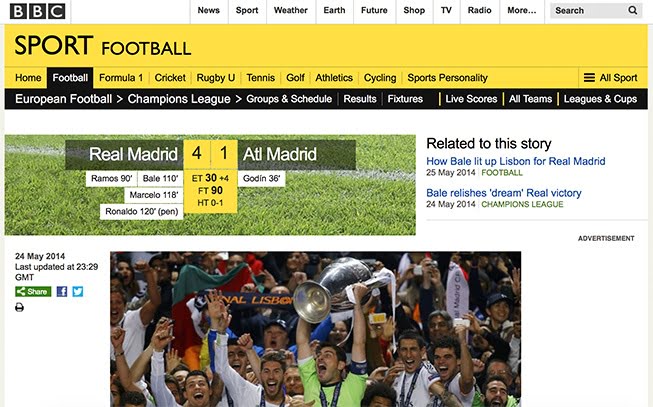 Words in the news: Wilt

The emphatic scoreline after extra time does no justice to the drama that unfolded at Estadio da Luz as Atletico stood moments from winning the trophy for the first time only to end exhausted and well beaten.

Diego Godin capitalised on an error from Real’s veteran goalkeeper Iker Casillas to give Diego Simeone’s newly crowned La Liga champions a first-half lead, one they protected with fierce intensity until 90 seconds from the end of five minutes of stoppage time when Sergio Ramos headed in Luka Modric’s corner.

Atletico wilted visibly after that, and Real ruthlessly completed the job of becoming the first club to claim the trophy 10 times, an achievement known as “La Decima” (the 10th).

Bale, who had wasted earlier chances, headed in from an acute angle after goalkeeper Thibaut Courtois blocked Angel Di Maria’s shot with 11 minutes left. This was effectively the match-winning moment.

The Welshman kept going despite not being at his best and this was the sort of contribution that he and Real had in mind when he made his £86m move from Tottenham last summer.

Substitute Marcelo added a third with a shot Courtois should have saved before Cristiano Ronaldo salvaged something from a disappointing personal performance, scoring his 17th goal of this Champions League campaign from the penalty spot after he was fouled by Gabi.

To wilt is to become weak or tired or less confident.

1. The spectators were wilting visibly in the hot sun.

2. He was wilting under the pressure of work.

3. Several sleepless nights made him wilt.