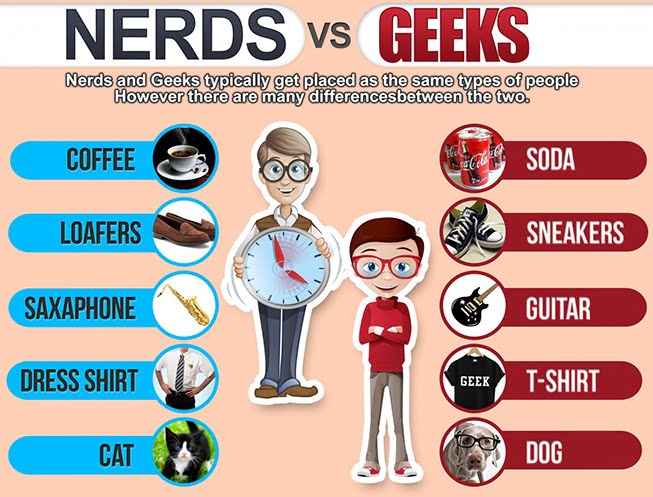 Nowadays, there are many words in English that used to have negative meanings, but have now been “reclaimed”, or used with positive intentions.

There are lots of reclaimed words in the English language, but this post will focus on words that used to be used negatively for smart and studious people.

You’ve probably heard a lot of these words before – but did you know what they originally meant?

new meaning: a person who is an expert or enthusiast in a hobby or intellectual pursuit, or someone who is interested in a topic.

original meaning: a foolish person who lacks social skills or is boringly studious.

new meaning: a person who is very interested in a specific topic or hobby.

Horatio is such a word nerd – he loves learning vocabulary in class!

The 1984 movie “Revenge of the Nerds” has been given credit for helping to make the word “nerd” a positive meaning. (Watch the trailer below!)

new meaning: someone who is awkward, but in a likeable way.

examples: some people might be called “adorkable”, which is to mean cute in a socially awkward way.

Marcel is so adorkable and shy.

original meaning: a studious or hard-working person, often with no social life.

new meaning: a person who looks into the specific details of a topic.

Kaan is a policy wonk, he knows every detail about visa regulations.

“Policy wonk” is the most common current use of the word “wonk”, and is now used to positively talk about someone who is very knowledgeable about the details of a specific topic.

« What would you eat for a typical English breakfast? Fun facts about Liverpool »