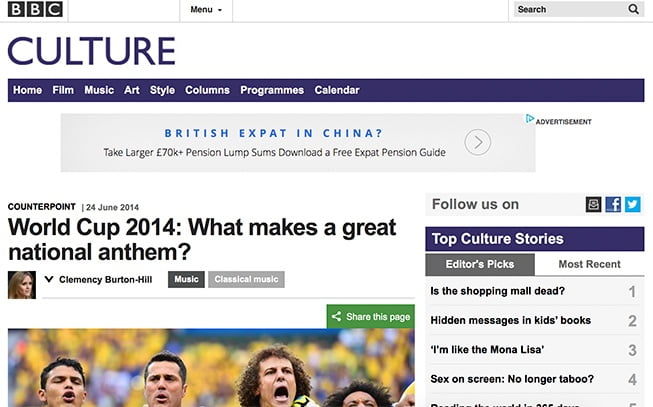 Words in the news: Anthem

Origin:
Few things can rally a country’s pride – and unite its people – like a stirring piece of music. Clemency Burton-Hill dissects what makes an anthem great.

Ever since I was a child I’ve been spellbound by national anthems. Not because I’m fervently patriotic but because I come from a family of passionate football fans; combined with my love of music and my general fondness for anything a bit sentimental, that seems to have made my penchant for a good anthem inevitable. Plus, I’m married to a Welshman, and as anybody with even a passing familiarity with rugby knows, the Welsh take their beautiful national anthem very seriously indeed.

My experience with national anthems began early, when my two older brothers sat me down to watch Britain’s FA Cup Final when I was about five and we all sang along – with mostly made-up words – at the tops of our voices before kick-off. A decade later, during the European football championships in 1996, I was at Wembley to watch England thrash Holland 4-1. The football was fantastic, of course – what would we give to be able to beat Holland, or anyone, 4-1 these days? – but it was the experience of belting out the national anthem amid 80,000 people that really sticks in my mind.

An anthem is a song that has a special importance for a country, an organization or a particular group of people, and is sung on special occasions.

1. The European anthem was played at the opening and closing ceremonies.

2. The anthem that the organist played cemented Soapy to the iron fence.

3. The song could become an anthem for the classless society.