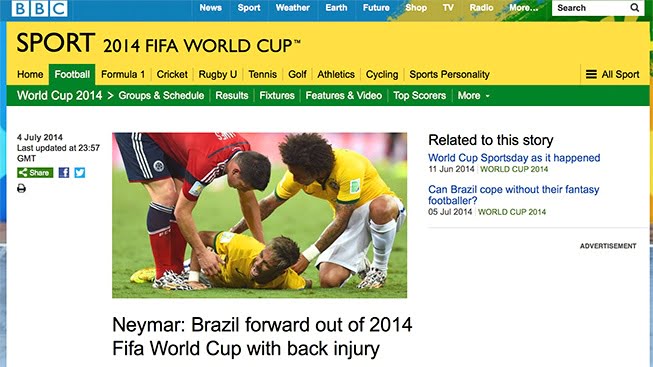 Words in the news: Stretcher

The 22-year-old fractured a vertebra in his back when he was kneed in a challenge by Juan Zuniga.

Neymar was in tears when he carried off on a stretcher, before being taken to hospital in Fortaleza.

Coach Luiz Felipe Scolari said: “Neymar was going to be hunted. For three matches that has been happening.”

“It’s not serious in the sense that it doesn’t need surgery, but he’ll need to immobilise it to recover.”

Lasmar added that he expected the recovery period to take at least a few weeks.

Neymar recovered from thigh and knee injuries sustained in the second-round win over Chile to play against Colombia.

He has featured in all five of Brazil’s matches at the 2014 Fifa World Cup and is their top scorer with four goals.

A stretcher is a long piece of strong cloth with a pole on each side, used for carrying somebody who is sick or injured and who cannot walk.

1. He was carried off on a stretcher.

2. An ambulance officer brought a stretcher for the injured woman.