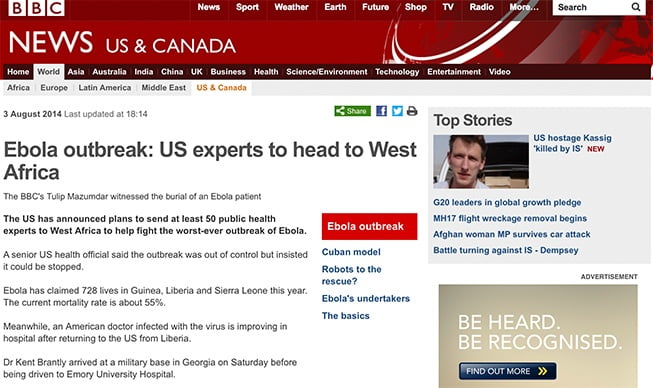 Words in the news: Haemorrhage

A senior US health official said the outbreak was out of control but insisted it could be stopped.

Ebola has claimed 728 lives in Guinea, Liberia and Sierra Leone this year. The current mortality rate is about 55%.

Meanwhile, an American doctor infected with the virus is improving in hospital after returning to the US from Liberia.

Dr Kent Brantly arrived at a military base in Georgia on Saturday before being driven to Emory University Hospital.

Another infected American, aid worker Nancy Writebol, is expected to arrive in the US soon.

The virus spreads through human contact with a sufferer’s bodily fluids.

Initial flu-like symptoms can lead to external haemorrhaging from areas like eyes and gums, and internal bleeding which can lead to organ failure.

Haemorrhage is a medical condition in which there is severe loss of blood from inside a person’s body.

1. He was checked for any signs of haemorrhage.

2.The soldier suffered a massive haemorrhage and died soon after.