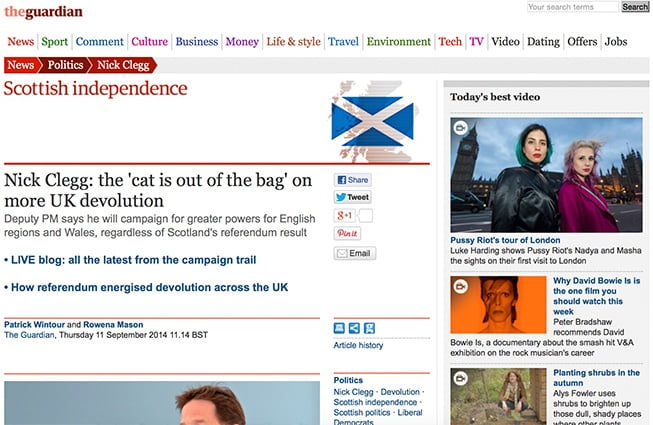 Words in the news: Unfurl

Nick Clegg has said “the cat is out of the bag” on devolution in the UK and predicts the issue will dominate British politics whatever the result of Scotland’s independence referendum.

The deputy prime minister promised to be on the picket lines calling for greater decentralisation in England as he insisted irreversible further powers would be handed to Scotland even after a no vote.

Clegg is due to give a major speech on the topic on Friday when he helps launch a report on decentralisation in England prepared by the centre-left thinktank the Institute for Public Policy Research.

With Tory MPs already unfurling the flag on English patriotism and John Denham, the Labour MP for Southampton, calling for an English Labour party, there are already signs that further devolution to Scotland will have a knock-on effect in Wales and England, as well as possibly Northern Ireland. There is also likely to be calls for further subsidies to Scotland to be cut.

Clegg said: “I think it is really good we are devolving more power to Scotland and to Wales. But what about England? What about Manchester and Sheffield and great places like that? Why cannot they have more say about their own affairs? “People are dead right: the status quo cannot carry on. We cannot have this very welcome process of devolution to the nations of the UK but somehow keep England centralised.

Unfurl is when something that is curled or rolled tightly unfurls, or you unfurl it, it opens.

1. He unfurled the newspaper and began to read.

2. They unfurl the flag and let it flutter in the wind.

3. I want to unfurl my tender buds like banners to announce the arrival of spring… I want to feel the warmth of the sun on my face and the blessing of the morning dew on my petals!