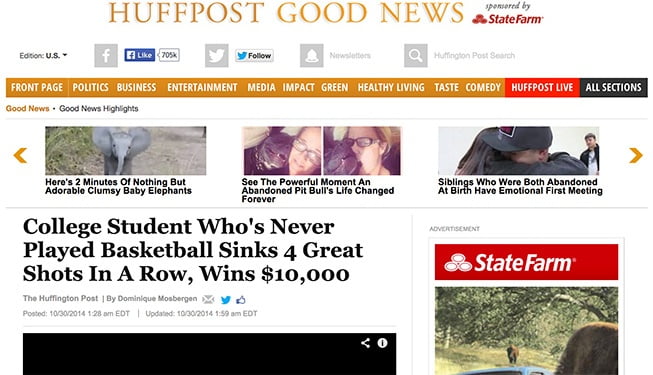 Words in the news: in a row

On Monday, Gustavo Angel Tamayo, a 23-year-old student at Bryan College in Dayton, Tenn., wowed the crowd gathered in the school’s gymnasium when he scored a lay-up, a free throw, a 3-pointer and a half-court shot in quick succession to win $10,000 in tuition money. He had to score all four shots in under 30 seconds to win the prize.

Tamayo told NBC News this week that he’d “never played basketball in [his] life.” And, Tamayo added, he had scored the winning shots with a broken finger, which he’d shattered while playing soccer.

“I’m not sure there’s a tougher contest,” Don Rekoske, basketball coach at Bryan College, told the Chattanooga Times Free Press of Tamayo’s impressive four-shot feat. “He had to go four for four, and you have to be hurried to make it within 30 seconds. It’s a very tough contest to win, but when you win, you get paid for it. He won $10,000; some will probably go toward his school bill and some in his pocket.”

In a row indicates that if something happens several times in a row, it happens in exactly the same way each time, and nothing different happens in the time between.

2. This is the third Sunday in a row that it’s rained.

3. The team has chalked up its fifth win in a row.

« All about the red poppy Words in the news: let off steam »