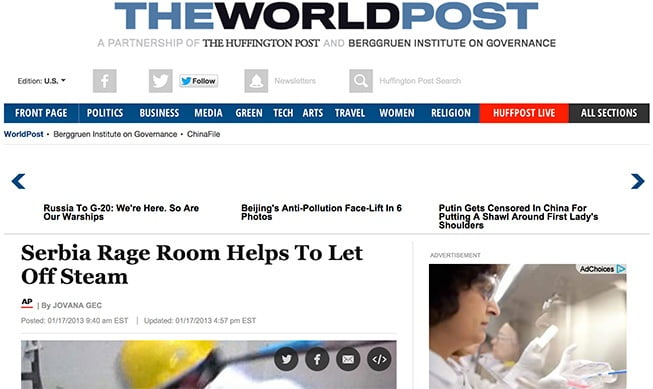 Words in the news: let off steam

NOVI SAD, Serbia — Savo Duvnjak looks around the room, lifts a metal baseball bat and wrecks everything in sight – bed, table, shelves, chair – until there’s nothing left to wreck.

This isn’t a criminal onslaught. It’s the Rage Room.

And it’s smashing its way to success in Serbia one angry visitor at a time.

“This feels so good!” Duvnjak said sweating and panting, as he admired the mound of debris he created – for just a modest fee.

“I feel I let go of all my negative energy,” the 18-year-old gushed. “This last year was a tough one and I wanted to end it with a bang!”

Since it opened in the northern Serbian city of Novi Sad in October, the Rage Room has drawn a flurry of attention in the Balkan country where two decades of war, political crisis and economic hardship have driven many people over the edge. Inspired by a similar “Anger Room” in Dallas, Texas, Serbia’s version was set up by two teens who saw the U.S. original online and figured it could be a way to earn pocket money.

Let off steam means to get rid of your energy, anger or strong emotions by doing something active or noisy.

2. The children were out in the playground letting off steam.

« Words in the news: in a row Anyone for English toffee? »