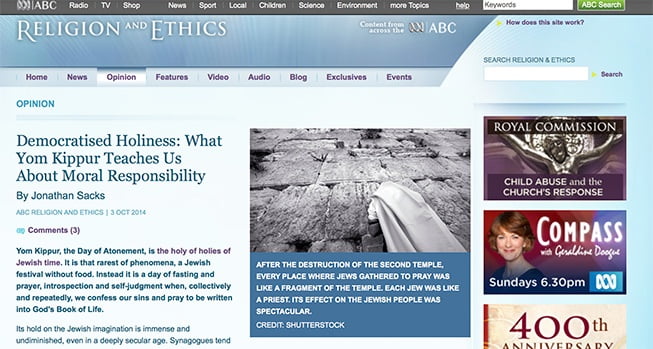 Words in the news: Secular

Origin:
Its hold on the Jewish imagination is immense and undiminished, even in a deeply secular age. Synagogues tend to be fuller on this day than any other. The atmosphere is vivid, the music solemn and majestic, the imagery gripping and powerful.

It is as if the world had become a courtroom. God is sitting in judgment. The trial is about to begin. The watching angels are terrified, and we are the accused, our lives passing under Divine scrutiny. It is a drama not unlike the opening scene of the book of Job.

It is an emotionally demanding experience, but we emerge with a sense of purification. God’s forgiveness allows us to be honest with ourselves. We recognize our imperfections, admit our failures, and plead to God for clemency. We are his subjects, but we are also his children, and how angry can God be with us, given that he brought us into being in love?

God judges but he also forgives: that is one of the most beautiful of the many ideas the Judeo-Christian tradition gave the world. Yom Kippur is the supreme day of forgiveness.

But there is a story to be told about the history of the day itself that is relevant to the condition of the West in the twenty-first century.

Secular means something not connected with spiritual or religious matters.

1. The choir sings both sacred and secular music.

2. What conclusions would we come to about the nature of death if we had to think about it from a secular perspective?

3. Rather than listen to a Bible story, the class read Stone Soup, a secular parable of a traveler who feeds a village by making a stew using one ingredient from each home.