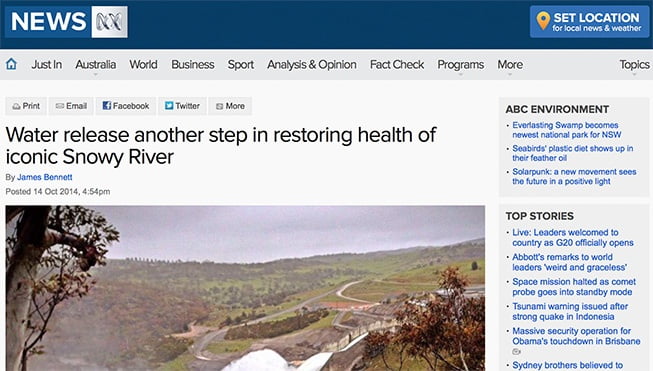 Words in the news: Spawn

More than 10,000 megalitres of water flowed down the river in just eight hours, the biggest single pulse in a two-week flush designed to mimic the spring snow melt.

The high-volume release was part of continued efforts to restore the parched river, which was reduced to just 1 per cent of its annual flow rates by the construction of the Snowy Hydro Scheme.

The scheme, providing hydro-generated electricity to the national power grid, took 25 years to build and was completed in 1974.

Today’s water release was the fourth annual pulse designed to flush accumulated sediment from the riverbed and make it easier for fish to spawn.

Simon Williams from the New South Wales Office of Water said the tactic was proving effective in the stretch of river just below the dam wall.

To spawn is for fish, frogs, etc, to lay eggs.

1. Many sea fishes spawn in rivers.

2. The fish were madly pushing their way upstream to spawn.

« Buying your fish and chips Let’s hit the road »