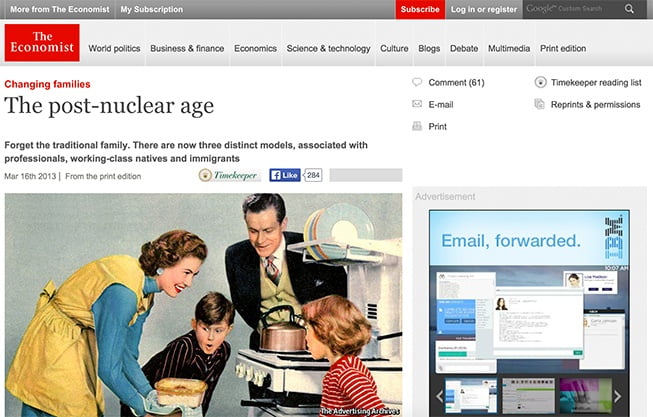 Words in the news: nuclear family

IN THE future perhaps the only proudly traditional families left in Britain will be those of politicians, using their wives and children as props. Jon Cruddas, a prominent Labour Party strategist, says that “stable, secure families” are the “bedrock of our lives”. According to Iain Duncan Smith, the Conservative welfare secretary, the last government “cloaked neglect of the family under the veil of neutrality.” The prime minister wants to encourage marriage through a tax break. Yet society is changing beneath the politicians’ feet.

Since the 1980s the number of marriages has collapsed to Victorian levels. Divorces have climbed from 16,000 per year in 1945 to over 117,000 per year now. In 2011 the proportion of children born out of wedlock reached 47%, up from around a fifth in the 1980s. Birth rates and family sizes are well below their 1960s peaks. As Spencer Thompson of IPPR, a think-tank, puts it: “The two-parent, male-breadwinner family is basically extinct.”

Yet these trends, which seemed inexorable, are variously slowing, stopping and reversing. The proportion of marriages that dissolve quickly has fallen to levels last seen in the late 1970s (see chart 1). Meanwhile, according to data from the General Lifestyle Survey, the proportion of families headed by a single parent dropped from 27% in 2002 to 22% in 2011. Even the increase in the proportion of children born out of wedlock has slowed markedly, though it has not yet plateaued.

Fertility has unexpectedly recovered from its 1990s lows, pushing Britain’s birth rate back up almost to 1970s levels. At the start of this century, a hypothetical average British woman had just 1.63 children over her lifetime. Now she has 1.93. This is partly because of an influx of immigrants, who tend to have more children. But British-born women are having more babies, too. Remarkably, increasing fertility has coincided with later births. The average mother now has her first child at the age of 28, up from 24 in 1970.

Yet all this does not mean the old-fashioned nuclear family is back. Rather, the British family has splintered. There are now three broad family types, identified with the university-educated professional classes, the native working classes and immigrants. Each is going its own way.

Nuclear family is a term used to define a family group consisting of a pair of adults and their children.

1. The children stay in the nuclear family until they grow up and marry.

2. Not everybody nowadays lives in the conventional nuclear family.

3. Their decline discredited social models, such as the nuclear family, which had begun to replace the old patriarchal clan system.