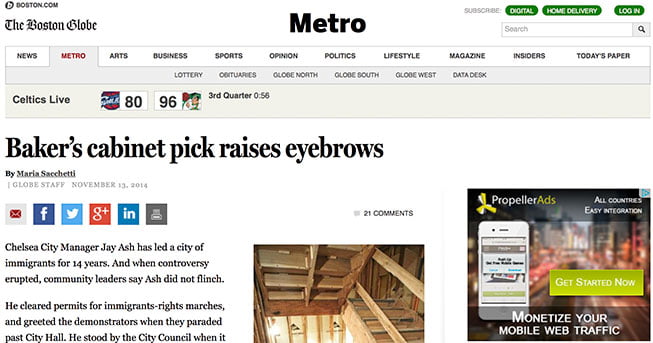 Words in the news: right up one’s alley

Chelsea City Manager Jay Ash has led a city of immigrants for 14 years. And when controversy erupted, community leaders say Ash did not flinch.

He cleared permits for immigrants-rights marches, and greeted the demonstrators when they paraded past City Hall. He stood by the City Council when it declared Chelsea a sanctuary city for immigrants. And he welcomed immigrant children to the city during a national crisis last summer when some mayors sought to turn them away.

“I just think Jay will approach things with respect and dignity for all human beings and a realistic world view,” said Molly Baldwin, chief executive and founder of Roca, a nonprofit in Chelsea that works with high risk youth and young adults. “If we can have a lot more of that in government that’s a good thing.”

“You won’t find a bigger advocate” for affordable housing, Avellaneda said. “You’ve got to look at the position he’s appointed to. That’s right up his alley.”

Right up one’s alley means something is ideally suited one’s interests or abilities.

1. He loved opera, so this program of arias was right down his alley.

2. Skiing is right down my alley. I love it.

3. If you enjoy a mystery, a 330-mile side trip to Marfa in West Texas might be right up your alley.

« What the Virgin Galactic crash means for space tourism IELTS Speaking topic: A beautiful place where you want to have a home »