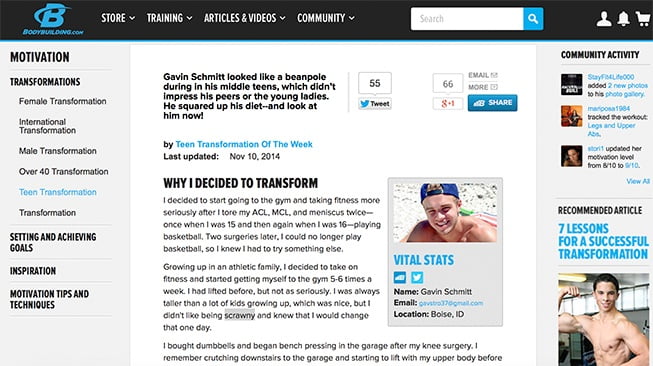 Words in the news: Scrawny

Origin:
I decided to start going to the gym and taking fitness more seriously after I tore my ACL, MCL, and meniscus twice—once when I was 15 and then again when I was 16—playing basketball. Two surgeries later, I could no longer play basketball, so I knew I had to try something else.

Growing up in an athletic family, I decided to take on fitness and started getting myself to the gym 5-6 times a week. I had lifted before, but not as seriously. I was always taller than a lot of kids growing up, which was nice, but I didn’t like being scrawny and knew that I would change that one day.

I bought dumbbells and began bench pressing in the garage after my knee surgery. I remember crutching downstairs to the garage and starting to lift with my upper body before I could even walk again on my knee. I watched videos on lifting and followed some magazine routines. I also got help from my mom, who had ten years of experience with being a personal trainer.

After months of working out in the garage, I decided it was time to start going to the gym; now you can find me there 4-6 times a week. It has helped me to keep busy and become more disciplined with everything in my life.

Scrawny describes someone who is very thin in a way that is not attractive.

1. He had long scrawny fingers.
2. There were a few scrawny chickens in the yard.
3. For more than an hour a scrawny guy sat at a bar staring into his glass.