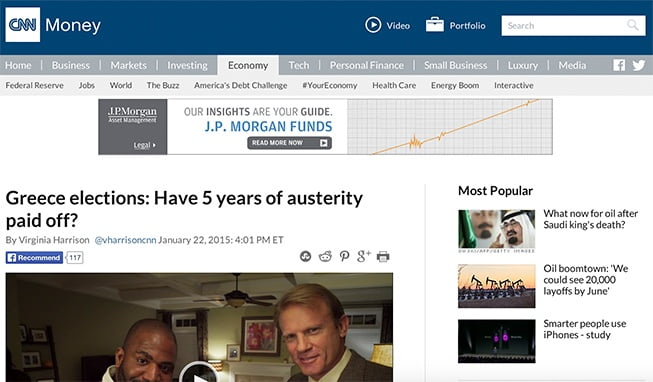 Words in the news: Austerity

Sunday’s national elections are widely seen as a vote on years of punishing austerity that its citizens have had to endure, and whether they can handle much more.

Back in 2010, the country accepted its first bailout: €240 billion ($277.8 billion) of international aid to rescue its battered economy. In return, Greece agreed to deep cuts in government salaries, tax hikes, a freeze on state pensions and bans on early retirement.

Nearly five years on, Greece’s economy is in better shape, but life for many Greeks is much worse. Unemployment has soared and wages have fallen even as people are working longer — all of which are fueling demand for change.

The anti-austerity Syriza party is expected to win the election. The party has attracted significant public support on promises to renegotiate bailout terms and deliver relief to fed up Greeks. But victory for Syriza would cast doubt on the still fragile country’s economic future.

So how far has Greece come since the start of its financial crisis?

Austerity is a situation when people do not have much money to spend because there are bad economic conditions.

2. Children are afraid of the austerity of their schoolmaster.