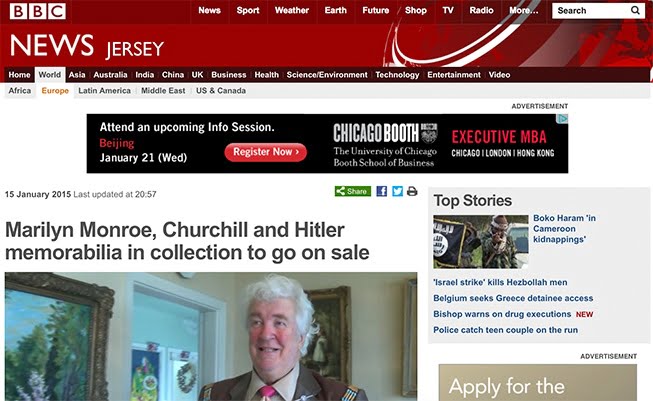 Words in the news: Memorabilia

A collection of rare memorabilia worth about £10m is to be sold to raise money for charity.

Jersey collector David Gainsborough Roberts has spent his life collecting everything from Marilyn Monroe’s bra to paintings by Winston Churchill.

He said: “I have been collecting for many years, I’m 70 years of age now, I don’t have a wife and children so I thought I must sell things.”

Mr Gainsborough Roberts says he hopes to use the money to help people.

He says the collection – most of which is linked to celebrities – includes Billy the Kid’s guns, paintings by both Churchill and Adolf Hitler and Marilyn Monroe’s dresses.

He said because he does not have an immediate family to leave it to he does not want people sorting his estate to sell things off for less than they are worth.

An expert in Marilyn Monroe, he said the auction will be held next year around the time of her 90th birthday and that some items will go for a lot of money.

He said: “I should have concentrated on one subject, then I would be a great authority on that subject, but I started with Marilyn then theatrical things, royalty, Churchill, Third Reich items.

Memorabilia are kinds of things that people collect because they once belonged to a famous person, or because they are connected with a particular interesting place, event or activity.

1. The new-opened museum exhibits memorabilia in his long career.

3. The Library of Congress is unveiling an exhibition of Lincoln memorabilia.